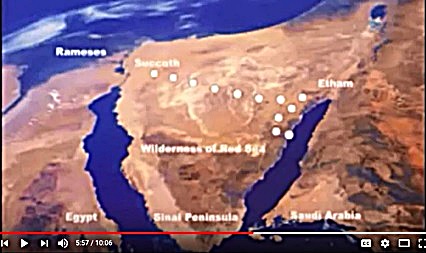 See a 10 minute video about Joseph & the location of
the Red Sea where Egyptian chariot wheels
still remain at the bottom !

STORYLINE  OF  THE  BIBLE  PODCAST

Joseph,  the eleventh son of Jacob is sold to a merchant caravan by his jealous brothers and taken to Egypt!  Because God gives Joseph the power to interpret dreams,  the Pharaoh makes him an advisor or lord of his household and a ruler throughout the land of Egypt.  The great famine that Joseph told the Pharaoh about comes over the land but because Joseph has stored a great abundance of food,  Egypt has more than enough!  Jacob, who is living in the land of Canaan,  sends his sons to Egypt to buy food.  Joseph reveals himself to his brothers and has all his family brought to Egypt.

Author's Note:  I think you would really enjoy the full story of Joseph because it has so many twists and turns. How Joseph is favored by Jacob, his father, because he is the first son of the wife he chose and loved. How Joseph's dreams cause his brothers to become jealous and sell him to merchants going to Egypt and then tell Jacob that Joseph has been killed and eaten by a wild animal.

Joseph is just a young boy when he is sold, but in Egypt he accomplishes much, but is falsely accused of rape and spends years in prison. But because he can interpret dreams that come true, the Pharaoh summons him to give the meaning of a dream he had that no one else can explain. Joseph explains the dream to Pharaoh telling of a great famine to come and lasting seven years.

Joseph is now thirty years old when Pharaoh puts him in charge of his land and Egypt is saved from a disaster. The story goes on to tell how Joseph responds to his brothers who come for food. He brings his whole family to Egypt and has a heart-filled reunion with Jacob, his father, who thought Joseph was dead.

After the death of Joseph, a new Pharaoh comes into power who didn't know Joseph,  but he is concerned about how fast the Jewish population is growing.  Worried about the safety of his kingdom,  he puts the Israelites into bondage and tries to control their population by putting to death their male newborn.

Pharaoh's daughter finds the newborn baby,  Moses,  floating in a reed basket when she comes to the Nile river to bathe.  The Jewish mother of Moses put him there because she was afraid they would kill him.  She is near by when Pharaoh's daughter is looking for someone to nurse the baby and without knowing it,  arranges for Moses' mother to take care of the baby for her.  When Moses is older,  Pharaoh's daughter adopts him as her son.

When Moses is grown, he visits the places where the Israelites are working for the Egyptians and sees an Egyptian guard striking an Israelite.  He becomes angry and kills the guard.  The Pharaoh hears of the situation and tries to kill Moses, but Moses flees to the wilderness of a place called Midian.  Moses finds a home with a priest that has seven daughters and marries one of his daughters name Zipporah and she bares him a son named Gershom.

Moses is taking care of a flock of sheep belonging to his father-in-law near the mountain of Horeb when he sees a bush that is burning but not being destroyed.

God speaks to Moses from the bush and tells him that Pharaoh is dead but a new Pharaoh is still holding the Israelites in bondage and He has heard their cry for help.  God tells Moses to go back to Egypt and tell the Pharaoh to free his people so they may go the land God has waiting for them.  Then God tells Moses that he must lead the Israelites out of Egypt to the promised land!

Moses goes to Egypt with his Levite brother Aaron and tells Pharaoh to let the Israelites go on a three day journey to sacrifice to the Lord God of Israel or he would punish them.  Pharaoh refuses to let them go and makes the Israelites work harder because of what Moses and Aaron said.  The Israelites begin to resent Moses and Aaron.  Moses again confronts Pharaoh for the release of the Israelites and turns his staff into a snake. The Pharaoh has his magicians turn their staffs into snakes but Moses' snake swallows their snakes,  yet the Pharaoh would still not listen because his heart was hardened.

God brings the ten plagues upon the Pharoh and Egypt using Moses and Aaron to give Pharaoh the opportunity to let the Israelites leave Egypt after each plague.  These were the plagues:

(Found in the book of Exodus, Chapter 1 through Chapter 19)