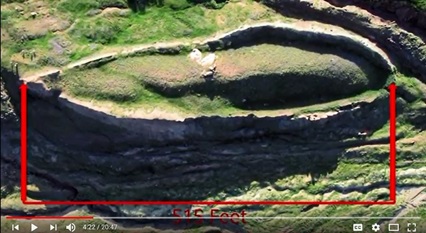 By the time Noah came to be,  the Earth had become a bad place to live because the people were wicked and did as they pleased.  There were even stories of giants;  'sons of god or gods'  who saw the beautiful daughters born to men and took them for their wives.  Then God said,  "My Spirit will not remain with man forever, for he is corrupt...."  and made the length of years a man would live to about one hundred and twenty years.

' When the Lord saw how wicked everyone on Earth was and how evil their thoughts were all the time, he was sorry that he had ever made them and put them on the Earth.  He was so filled with regret that he said, "I will wipe out these people I have created, and also the animals and the birds, because I am sorry that I made any of them."'

God looked upon Noah favorably because he was righteous compared to the wicked generation that lived on the Earth and the bible says Noah walked with God and did everything God commanded him.  Noah had a wife and three sons: Shem, Ham, and Japheth.  Although the bible doesn’t name them,  Noah’s sons had wives.

The ark was to be finished to within [20.6 inches] of the top, which was the roof.  The [20.6 inches, ( An Egyptian cubit )] provided enough space to put window hatches that could open and close to let in air and light.  There was also a large door in the side of the ark.  God told Noah to make rooms in it and make the ark waterproof by coating it with pitch (a tar-like substance) inside and out.

Here is information quoted from "Noah's Ark - Ron Wyatt's Story".  "And Moses was learned in all the wisdom of the Egyptians." ( Acts 7:22 )

Moses was the author of the Genesis account of the flood.  He would have known the cubit of the Egyptians.

The Hebrew cubit didn't come into existence until there was a Hebrew nation,  after Moses death.

The Encyclopedia Britannica, Vol 19, page 728, stated, "The Egyptian cubit is generally recognized as having been the most ubiquitous (universal) standard of linear measurement in the very ancient world... The royal cubit = 20.62 inches, or 524 millimeters."

When everyone and everything was on board the ark, the bible says in

that Noah entered the ark...'Then the Lord shut him in.'

All the springs of the great deep burst forth, and the floodgates of the Heavens were opened and rain fell on the Earth forty days and forty nights.  The ark floated on the surface of the water and soon the waters rose and covered the mountains to a depth of more than twenty feet.  Every living thing on the Earth perished.

The waters flooded the Earth for a hundred and fifty days then the waters started to recede steadily from the Earth. At the end of another hundred and fifty days, the water had gone down and the ark came to rest on the mountains of Ararat. The waters continued to recede until the tops of the mountains became visible.  After forty days Noah opened the window he had made in the ark and sent out a raven, and when the raven didn't come back, he sent out a dove to see if the water had dried from the land.  But the dove could find no place to set its feet because there was water over all the surface of the Earth; so it returned to Noah in the ark. Noah kept sending out the dove and one time it returned with a freshly plucked olive leaf in it's beak.  Then Noah knew that the water had receded from the Earth. He waited seven more days and sent the dove out again, but this time it did not return to him.

Noah then removed the covering from the ark and saw that the surface of the ground was dry. Noah and his family had been on the Ark for over a year! (About 376 days after the flood,  the Earth is dry.) With Noah and his family, God started a New World.

God told Noah and his family come out of the ark along with all the birds,  the animals,   and all the creatures that move along the ground-- so they could increase their number on the Earth.  Then Noah built an altar to the LORD and sacrificed some of the clean animals and birds to God.  And God said, "Never again will I curse the ground because of man, even though every inclination of his heart is evil from childhood.  And never again will I destroy all living creatures, as I have done."  God blessed Noah and his sons and told them to have many children so that the Earth would be filled with their descendants.

God said to Noah,  "All the animals, birds and fish will live in fear of you. They are all placed under your power.  Now you can eat them as well as green plants;  I give them all to you for food.  The one thing you must not eat is meat with blood still in it;  I forbid this because the life is in the blood."

"If anyone takes human life, he will be punished.  I will punish with death any animal that takes a human life.  Man was made like God,  so whoever murders a man will himself be killed by his fellow man."

"You must have many children, so that your descendants will live all over the Earth."

God said to Noah and his sons,  "I am now making my covenant with you and with your descendants,  and with all living beings--all birds and animals-- everything that came out of the boat with you.  With these words I make my covenant with you:  I promise that never again will all living beings be destroyed by a flood; never again will a flood destroy the Earth."