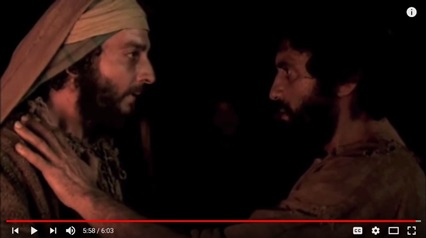 "The  Lost  Son"  from Jesus Of Nazareth
& "My  Shepherd  The 23rd Psalm"
by Chuck Smith at YouTube:

Many tax collectors and other people who were considered the outcasts of society came to listen to Jesus speak.  The Pharisees and the teachers of the law who were there grumbled, "This man welcomes outcasts and even eats with them!"

Jesus seeing their attitude asks them, "Which one of you, having a hundred sheep,  if he loses one of them, would not leave the ninety nine sheep in the pasture and go look for the one who is lost.

Finding him,  he returns and tells his family and friends how happy he is to have found the one who was lost.

In the same way,  I tell you,  there will be more joy in heaven over one who gives up their life of sin and seeks God's ways than the ninety nine who have been living faithfully in God."

Jesus told the story of a man who had two sons.  The younger son asked his father to give him his share of the property he would inherit and the father divided a portion of the property between his two sons.  The younger son sold his portion and went to another country where he wasted his money on wild parties and careless living.  Soon all the money was gone and he was left with nothing!

There was a famine in the land where he was living so he went and hired himself out to a citizen of that country who sent him into his fields to feed the pigs.  He was getting hungry, but no one gave him anything and he was thinking about eating the corn husk and bean pods the pigs were eating,  then he came to his senses and said,  "All my father's hired servants have more than they can eat and here I am about to starve!   I will go to my father and say, 'Father, I have sinned against God and against you.  I am no longer fit to be called your son, make me one of your hired servants.'"  He started the journey back to his father house.

He was still a distance from home when his father saw him.  Filled with pity, he ran and threw his arms around his son and began to kiss him.  The son said,  "Father, I have sinned against God and against you.  I am no longer fit to be called your son."  The father told his servants to bring the best robe and put it on him, and a ring for his finger and shoes for his feet.  Then he told his servants to prepare a feast with the prize calf saying,  "For this son of mine was dead,  but now he is alive;  he was lost,  but now he has been found."  So the celebration began!

Now the older son was coming in from the fields and heard the music and dancing.  He asked one of the servants what was going on.  The servant replied, "Your brother has come back home and your father has killed the prize calf,  because he got him back safe and sound."  The older brother was angry and would not go in.  So the father came out and begged him to come in,  but he said to his father, "All these years, I have worked for you like a slave and I have never disobeyed your orders.  You have not even given me a goat, so that I could have a feast with my friends!  But my younger brother wastes his inheritance and comes back home and you kill the prize calf for him?"

"My son," the father said, "you are always here with me, and everything I have is yours.  But we had to celebrate and be happy,  because your brother was dead,  but now he is alive;  he was lost,  but now he has been found."